1920s fashion was the perfect blend between style and function. Beautiful clothes that allowed women to move. 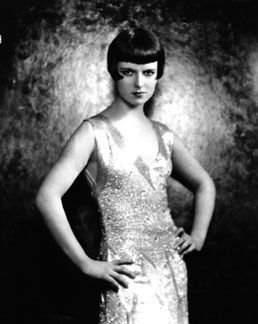 Louise Brooks Wearing the Top Fashion of the 1920s

Even 90 years after The Roaring Twenties ended, almost everyone still recognizes the style:

The History of 1920s Fashion

Fashion is shaped and influenced by the society and events which surround it.

Fashion is not something that exists in dresses only. Fashion is in the sky, in the street, fashion has to do with ideas, the way we live, what is happening. -Coco Chanel

1920s fashion is still famous because it was a huge shift from the previous era.

Society was speeding up, airplanes were taking people across the country in a matter of hours rather than a matter of weeks, automobiles could travel between several states in an evening. 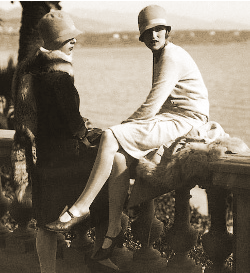 No longer were women willing to trade their mobility for the old stodgy customs of the Victorian era. Old-fashioned torture devices like the corset and the crinoline no longer served a purpose for young women who wanted to dance, go to work, hop into cars, and walk around town.

Society was changing & fashion changed along with it. Hemlines on 1920s dresses were rising quickly, one year mid-calf, the next year just below the knee...

Victorian Era corset and crinoline Vs. Louise Brooks in fashions of the 1920s

The Liberated Woman in the Roaring Twenties

In the United States women won the right to vote in 1920. And in the same year Congress said it was illegal to sell alcohol.

This social change of the 1920s is reflected in the fashion and also gave rise to some of the most famous, fashionable, and dangerous people of the decade, the gangsters, bootleggers, and notorious characters who owned the nightclubs and speakeasies.

This was the Roaring Twenties after all.

Nightclubs became the mythical venue for men and women to get dressed up, take their automobile, and go out drinking and listen to the new sounds of jazz music. This 1920s nightlife scene has remained a staple of hip young people ever since.

When World War One ended in 1918, society had never seen so much carnage on such a wide scale. The "Flaming Youth" as they became known, felt they needed to live their lives now, because the future they said, wasn't guaranteed.

Famous reporter, Lois Long's words became the rallying cry of the youth in the 20's:

Want to make your own Twenties style dress? Check out our 1920s dress pattern tutorial!


"Tomorrow we may die, so let's get drunk and make love." -Lois Long

Day Dresses of the Roaring Twenties

It is a myth that the dresses of the 1920s were short the entire decade, it wasn't until around 1925 that the hemlines of ladies dresses reached anywhere close to the knee.

Even so, in 1920 dresses were a sharp contrast to those of the Victorian Era.

The waistline began dropping in the late 1910s and kept descending, starting just below the bust line in 1920, between the breasts and natural waist in 1921, and at the hips in 1922.

Dresses hemlines were mid-calf at the end of the 1910s and stayed there all the way until 1922.

Daytime dresses of the 1920s were shapeless affairs, they didn't hug a woman's curves, instead they hung loosely, often even the sleeves were worn loose as well.

Floral prints were the rage in women's 1920s clothing; soft pastel colors in "Nile Green" "Sunset Orange" "French Blue" and "Maze" were the most popular colors of 1920s fashion for women.

1920s fashion reflects the time in which it was created, the Roaring Twenties was a time of prosperity and elegance for many. The evening dresses reflect the fact that people had money.

The materials, the beads, the accessories were all elegant and expensive. The evening dress followed the lead of the daytime dress in its structure at the waist and hem.

But where the evening dress departed from its daytime sibling was in its construction. 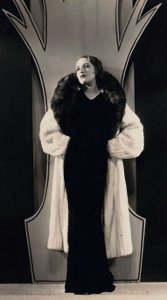 Bebe Daniels dressed in a beautiful evening gown (Circa 1927)

The 1920s is where the huge names of fashion design got their start:

Jeanne Lanvin invented what was called the robe de style made of velvet and silk. She often designed this dress in the robin's egg blue, a shade which is now known as Lanvin Blue.

Jean Patou, Madeline Vionnet, Mariano Fortuny, Jacques Doucet, Lucien Lelong, Mme. Premet all made their names as a result of 1920s fashion, designing some of the most beautiful evening gowns and 1920s dresses.

This was also the period that art deco fashions came into vogue with sharp angular lines and bright colors. Read more about the influence of art deco in the 1920s.

Is there any other item of 1920s fashion as iconic as the cloche hat? 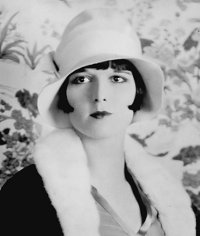 It's said that it was the invention of French milliner Caroline Reboux who introduced it in or around 1923 on the streets of Paris.

Made of velvet, satin, horsehair, straw or felt, the cloche (means "bell" in French) hid a woman hair and allowed her to tuck it up into the hat.

Some variations of the standard cloche were the gigolo hat with it's wider brim and crease at the top. One side dipped lower than the other, giving women a "devil may care" nonchalance

It's said that the flapper look started when Coco Chanel put on a man's sweater one morning and wrapped a belt around the waist. 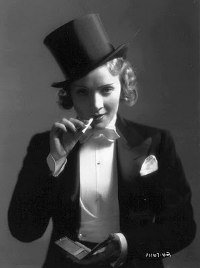 They not only began driving, smoking drinking, and having sex just like men, but they also appropriated his clothes.

But it's not that women stopped being sexy during this period. Through the reinvention of fashion in the 1920s, women redefined what "sexy" was.

While Chanel's clothing had a "masculine" influence that revolutionized and defined 1920s fashion, another French designer, Madeline Vionnet made dresses that celebrated the female form and revolutionized modern clothing as well.

Not everything was "boyish" about 1920s fashion, women still carried their femininity with style and grace, the package had just changed a little.

The Influence of Popular Culture on 1920s Mens Fashion

Thanks in large part to the decade's beautiful celebrities, the popularity of the movie industry, and the media's growing obsession with what was sexy, America's attention was firmly focused on acquiring a lifestyle of fashion, sexiness, freedom, and individuality.

Men's fashion in the 1920s changed as well, stars like Rudolph Valentino, Douglas Fairbanks, Al Jolson and Chalie Chaplin redefined what men should look like, and what they should wear.

The growing business class promoted growth of the major cities throughout the country and men began dressing in tailored suits rather than the overalls of the country.