Find the Perfect 1920s Costume To Suit Your Style

A classic 1920s costume is the perfect outfit for Halloween this year.

You can choose from many themes, a sexy flapper or gangster moll if you're a lady; or one of many different gangster costumes, Charlie Chaplin, or Charles Lindburg if you're a man.

Every Halloween A Speakeasy opens up at one of the neighbors' houses and friends get together for a 1920s party night of fun and debauchery.

Make sure you look your best.

Here are some resources and ideas to put together sexy gangster Halloween costumes and sexy flapper outfits.

The female version of the men's classic.

A perfect outfit if you want to turn heads and make an impact. Wear a nice pinstriped suit that hits all the right curves.

Can you do it as good as this sexy gangster gal?

The girl on the gangsters arm. Think Bonnie of Bonnie and Clyde.

Try to channel the flapper look here, with more of an edge. Wear a fedora, a boa, a feather in your hair.

Garters with sheer leggings. Of course you'll need a Tommy Gun for your getaway at the end of the night.

Going as a sexy gangster moll? Do you drive or ride shotgun?

We've talked a lot about flappers on this website. If you're going to be a flapper for Halloween there is tons of information for you to study, and lots of images.

The Dragon Lady A cult figure of the 1920s. Anna May Wong starred alongside many of the bigger names, like Marlene Dietrich.

A beautiful and sexy figure to style your own "Dragon Lady" costume after.

What you need: a Silk kimono, jet black greased down hair, dramatic eye makeup, chopsticks for your hair, and an icy attitude.

If you're a dark-skinned woman, with a flair for the exotic, Josephine Baker might be the perfect Halloween character and 1920s costume to try on.

The woman in the black helmet should be readily recognizable and a fairly simple costume to put together. Simply a bobbed straight black wig cropped just below the ears, an elegant black flapper dress, dark makeup, and a string of pearls should let people know who you are.

Though she didn't become a household name until the 1930s, Marlene Dietrich was an actress of the 1920s, named the 9th greatest female star of all time.

Known for her German roots, her accent, dressing in men's tuxedos, and her legs, your costume should reflect something of her brash and beautiful nature.

Marlene Dietrich Dressed in A Tuxedo. Think You Can Pull It Off?

The first woman to fly across the Atlantic Ocean by herself, Amelia Earhart displays the drive and vibrancy of the 1920s.

Basically hers would be a female version of the Charles Lindburg: leather coat, flight helmet and goggles. You could sexy this costume up with a revealing neckline and cleavage (if that's your thing), it's all up to you since it's your 1920s costume

Amelia Earhart Would Be an Original 1920s Costume

For many guys, dressing as a gangster is the classiest and most masculine 1920s costume you can wear.

Men wear this because a gangster costume is classy and iconic. It's the perfect costume for men who hate dressing up, but still have to anyway.

Truth be told many men feel uncomfortable dressing up in a costume, so this outfit serves dual purpose. You're dressed up, but you don't feel like you're wearing a costume.

People know the outfit, they recognize it, but you feel like you're just wearing a suit, perfect.

The Secret Ingredient: Oh, and don't forget the black, thick mustache to bring the look together.

This is the perfect costume for a guy who wants to make people laugh.

Charlie Chaplin? Hey, sometimes it's cool to be a Tramp.

A wool blazer with a sweater and dress shirt underneath, a thick tie or even a bow tie, a gray frizzy wig, thick eyebrows and a mustache.

Make sure to bring along a wooden pipe to bring everything together.

Albert Einstein Would Be a Brilliant Costume

Another take on the 1920s gangster costume, Al Capone was voted the #3 Best Dressed Man of All time by Esquire magazine.

You'd be doing well to take some of his fashion ques. A light fedora, blood red tie, a tailored pinstriped or chalk striped suit either 3-button or double-breasted for the vintage look (go to men's suits), beautiful shiny leather shoes and a gold watch.

An Al Capone Costume? He would not be pleased

Another icon of the 1920s. Babe Ruth could make for one of the most original 1920s mens costumes.

Of course you need a Yankee's jersey, #3 of course, an old Yankee's cap, maybe some stuffing for the waist (Ruth was not a slender man).

What About Babe Ruth For This Years Halloween Party?

A male sex symbol of the 1920s. If you have the balls to go as the effete man, a little bit metrosexual and a little feminine.

Rudolph Valentino is your man.

You'll have to explain to people who you are, and many will just assume you're just dressed as a modern hipster, but this look is sure to get a double-take from the girl dressed in the sexy gangster moll costume at the bar. 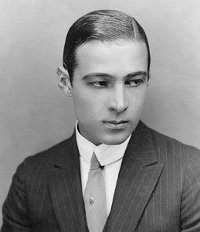 Want To Be a 1920s Male Sex Symbol? Go as Rudolph Valentino

The perfect icon of the 1920s. People might not remember the name, but they're sure to love your costume.

A leather bomber coat, a leather aviator's helmet, goggles, with a white collared shirt and a tie. Tuck your baggy khaki pants into your boots and you've got the look.