. . . and gave rise to the modern conception that gangsters and the criminal lifestyle are cool.

This idea still exists, for better or worse.

In the public eye, the 1920s gangster and bootlegger "above the law" lifestyle brought money, fame, nice clothes, women, cars, and homes.

Read a book or watch a gangster movie and the author or director will sweep you away in the romance surrounding the gangster lifestyle and the criminal code of honor.

Discover the rich history of 1920s and '30s gangster suits

Quality, high fashion suits and expensive accessories were as much the calling cards of the gangster then as they are today (though I doubt you'd hear the term haute couture being dropped regularly).

In the 1920s, gangster suits like those from Brooks Brothers (American), Brioni (Italian), or Gieves and Hawkes (English) would outfit image conscious gangsters.

Along with the flashy suit, the twenties also gave us the best dressed and most famous gangster of all time: Al Capone

The Birth of Gangster Culture

The 1920s plays host to many other organized criminals with expensive suits and flashy names.

In the 1930s the names became "Pretty Boy" Floyd and "Babyface" Nelson, while the 1940's gives us "Bugsy" Siegal. In more recent years the name parade brings John "The Teflon Don" Gotti, and Salvatore "Sammy the Bull" Gravano.

Every famous gangster has a colorful name to go along with his fine suit. It's also been said that the gangster, as the American public sees him, is a creation of the mass media.

Al Capone and His Son At a Chicago Cubs Game

The tailored suit is key to the gangster's uniform.

"The latest styles marketed the gangster as an avid consumer who invested the time and expense necessary to stay on the leading edge of fashion . . . his new automobile, his tastefully furnished apartment, his diamond stickpin, his two diamond rings, his beltbuckle . . . fifty suits of clothes, his twenty five pairs of shoes."

With that kind of extravagant lifestyle, it's no wonder Capone is smiling.

Classic gangster fashion remains as popular with men as the women who adore him.

The American Dream: The Rise of The Criminal Businessman

With the passage of prohibition in 1919, the twenties marked a huge shift in the way gangsters went about their everyday business.

No longer was it good business sense to beat someone over the head with a pipe to rob them of their pocket watch and loose change.

Instead, the mob organized and integrated itself throughout the neighborhoods of Chicago, Detroit, and the boroughs of New York City.

Bootlegging became huge business for the most successful gangsters of the era.

Some of them make millions of dollars a year supplying beer and liquor to the speakeasies around the country.

This way the gangster solidified his presence in urban culture and the true criminal businessman was born.

The Godfather trilogy is the cinematic expression of the "American Dream" come true: Vito Corleone comes to America with nothing. He struggles to make ends meet through legitimate employment, pulls himself up by their bootstraps, organizes a criminal mob of loyal followers, and becomes wealthy and powerful through his daring, cunning, organization, and hard work. 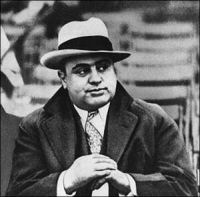 The Corleone family is the poster-child for success outside the box.

In the 1920s gangsters became the American icons of the self-made-man.

Expanding their organizations into illegitimate markets, namely racketeering, bootlegging, and prostitution, these gangsters live life by their own shady but strict code of ethics, but outside of the iron grip of the law.

1920s gangsters fashion owes much of it's rise in the public's consciousness to the prohibition and the newspaper media's love affair with these criminal media darlings.

The modern "gangster" remains the ultimate consumer of everything luxurious and expensive. For the criminal businessman: jewelery, suits, cars, and houses are the spoils of his lifestyle.