Famous Gangsters in the 1920s: Legends of the Jazz Age

The famous gangsters of the 1920s: Laughing All the Way to Hell

There are few criminals that get the adoration and publicity of mobsters. Gangsters are revered, feared, and hated all at the same time.

The mythology that surrounds men like Al Capone and "Bugs" Moran, found it's foothold in the 1920's with the help of prohibition--yet the archetypes that made them famous run deep in western folklore. 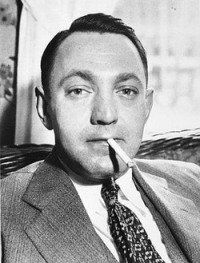 Success Outside the Box

The successful businessman is often held up as the typical American success story. Tall, handsome, and dressed in his powerbroker suit, the businessman goes to work in his high rise to crush small companies in order to support his typical "American" way of life.

The famous gangster, on the other hand, rather than crushing the small guy, IS the small guy made good (successful meaning good).

Gangsters are the modern-day urban Robin Hoods, the poor street urchin done good. The American dream of big dreams, individuality, and hard work can make something out of anyone.

For many the fascination with gangsters really took off with the passage of prohibition and the increasing media's attention on those men who decided it was more profitable to buck the system and get rich through their own means, than live by silly socially imposed rules.

Check out History of 1920s and '30s gangster suits

Being media darlings, these men were outright criminals, killers, and all around bad guys, yet the public couldn't get enough of these famous gangsters.

In the public eye, the gangster represents urban life: the streetwise, self-made man.

In the 20's, New York and Chicago were the major capitalist urban hubs of American society and organized crime.

Both were cities of stark contrasts between extreme wealth and abject poverty.

For many in the early 1920's business was booming, and Al Capone and other famous gangsters and bootleggers ran their respective cities like puppet masters.

Capone was the poster-boy of the media and he loved the attention.

He was the true rags to riches story that has been the plotline in one too many gangster movies throughout the years. In his time, however, Capone's fame was still a novelty.

As prohibition progressed Capone's fame, reputation, and influence grew, thanks in large part to his own public relations policy. Al was the ultimate showman.

Dressed in classic gangster wear, sporting a diamond ring the size of a golf ball, and usually good for a quote or two, Capone conspired in his fame like few others could. 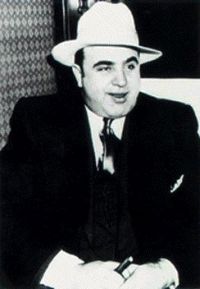 Raw, articulate, and aggressive, Capone molded the public's perception of famous gangsters as if from clay.

The Kings of Broadway

While Capone owned capitalistic Chicago, New York was the cultural hub of the nation.

New York's gangsters ran the streets and nightclubs like the kings of Gotham. As a hobby to his beer bootlegging profession, Owney Madden owned the most famous nightclub of all time: Harlem's Cotton Club.

Madden and others like Dutch Schultz, "Legs" Diamond, and "Lucky" Luciano paraded themselves through the New York Broadway shows and Harlem gambling joints.