1920s Dresses and Designers: Discover the relationship between beauty and functionality. . .

Individuality rules fashion and separates the 1920s from any previous periods in fashion history.

Jazz Age fashion marks a huge movement in style. . . away from the stodgy and outdated Victorian fashions to an inspired "modern" look.

Many have heard the horror stories of the destructive effects corsets had on the female body. . . exerting up to 80 pounds of crushing pressure on a woman's waist and internal organs. 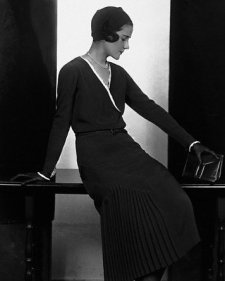 The Beautiful Simplicity of 1920s Dresses

In no uncertain terms - corsets were socially approved medieval torture devices used to hinder a woman's movement. Artists and fashion designers took the new-found freedom of the modern age and ran with it, creating dresses that were beautiful, functional, non-restricting, and sporty.

1920s dresses and fashion show the influence of many different art movements of the era, most notably Art Deco.

With these new fabrics and colors, modern fashion designers created an elegant new palette from which to work. Check out this great site for more information on elegance. 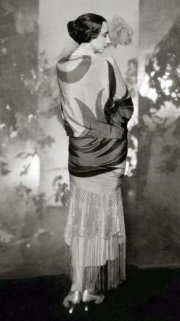 At the turn of the century, Paul Poiret made his mark on fashion by designing dresses that pulled women from their constricting corsets and petticoats.

Poiret's new designs showed the influence of "Orientalism", a new movement that moved away from the ornate and stifling dresses of the previous century.

Poiret didn't free women from the constricting fashions of the past in order to liberate them. . .

He did it only because he found his new styles more beautiful and fashionable.

Fashion, in Poiret's eyes, was the master and women were it's servants.

This was, after all, the man who developed the "hobble" skirt.

The hobble skirt constricted a woman's ankles so tightly that getting into and out of carriages nearly impossible, and walking in baby steps absolutely necessary.

Many of Poiret's dresses were similar to the Japanese kimono, exhibiting a movement toward simplicity in women's fashion.

However, as we know so well by now, simple does not mean less beautiful. 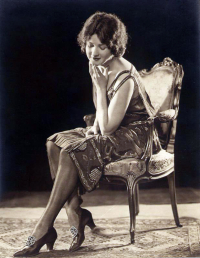 Poiret would often pair two simple rectangular pieces of colorful and luxurious fabric together to form the base of the dress, then he would experiment with the cut to create a dress that separated itself from the styles of the Victorian Age.

Following in Poiret's footsteps Coco Chanel's fashion designs were the true liberator of the modern woman in the 1920s.

Chanel, no less perfectionist and elitist than Poiret, redefined femininity in her dresses and other fashions.

She scandalized the modern establishment with her rising hemlines which nearly exposed the woman's knees.

Though she wasn't the only designer to make her mark on 1920s dresses and flapper fashion it will always be Chanel who defined them.