Flapper Culture: Fashion and the Rise of Hollywood's Leading Lady

Flappers set American society abuzz in the 1920s, jazz was becoming the musical craze of young people, hemlines were rising in girl's skirts in length and in the backseats of automobiles. Modern society was emerging in the speech, fashions, and actions of young girls all over the country. The motion picture industry became an obsession for young men and women who dreamed of gracing the big screen and a luxurious life in Hollywood, or on Broadway. 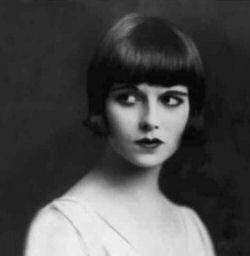 Celebrity was becoming a buzzword as the popular media followed and wrote about the beautiful stars and their doings around town and published these exploits to various Podunk cities, from Des Moines to Boise.

Like prohibition, which made alcohol illegal, dangerous, and alluring; the flapper made her lifestyle sexy and alluring the pre-pubescent girls of the 1920's.

Though the picture quality isn't great, and it's from a modern nightclub, it is enlightening about 1920's flapper culture and how they danced

Women were discovering what life was "really like". Flapper culture seemed to throw off the shackles of Victorian society's prudery and modesty, and opened the eyes of many young women and the mouths of many young men.

Moore separated herself from the typical conservative Hollywood actress of the time by becoming a leading lady rather than a supporting role to the leading man.

Moore unwittingly ushered in the era of Hollywood starlets with Mary Pickford, Clara Bow, and the flapper queen, Louise Brooks following in Moore's footsteps. Moore famously feuded with other up and coming actresses, namely Bow, who actually feigned illness to get out of a staring role with Moore when treated poorly.

1920s clothing was defined by straight flat angles. Stark in their sheer simplicity. These "shapeless" dresses hid a woman's natural waist and put an emphasis on her hips.

Sashes, swatches, swaths of fabric, hip length coats marked a woman's hips as the point of emphasis in these styles.

In this time period designers also began experimenting with prints and geometric designs meant to reflect the shape of the dresses they were feature on.

Taking their styles from the Japanese kimonos these "blank" canvases lent themselves to beautiful Art Deco dresses that distinguish much of 1920s clothing.

But she was too darn cute and had too much spunk not to make it big. And she made it big!

Her human side was captivating; her love of people, off-color comments, and dirty stories is legendary. Bow was a true flapper and lived her life how she wanted, where Moore only played a flapper on the screen.

And there lies the difference! Flappers were real. These were real girls who wanted more from their lives. They didn't want the drudgery of social conventions and routine. Flapper culture saw the immensity of the world and set out to experience everything.

They embarked on life even if they had holes in their shoes!

Flapper culture wanted it all. We can't forget that the 1920's came directly after one of the biggest atrocities in the history of mankind, "the war to end all wars", World War One. America and the world had lost it's innocence.

With this loss of innocence came the realization that large groups of people's thoughts could be controlled through propaganda.

The end of the war put a lot of propagandists in the unemployment line; it's a good thing that America had a lot of advertising to sell.

Flapper culture was bombarded by ads--everything, from the "cure to bad breath" to the "cure for ugliness", seemed to be sold through the guise of finding the perfect man for a woman to marry.

Entire maladies were invented by creative marketing firms and the newspapers' need to sell advertising.

To the marketer, the lack of marriage could be remedied through the effective use of many hygiene and beauty products. Even the counter-culture flappers with their progressive thoughts, energetic dances, and modern fashions couldn't escape the grasp of consumer culture.

Beauty and the Bitch

With the booming economy, consumerism ran roughshod all over the map.

A girl's popularity and devotion to the most recent style trends, namely flapper fashion was fed by her adherence to the beautiful designs she saw on the silver screen and the advertisements she read in the popular magazines of the day.

In 1922 flapper culture found it's champion when a 17 year old raven-haired beauty with a Kansas accent started appearing in Broadway Shows.

Even at 17, Louise Brooks was an amazing dancer with an appetite for alcohol, fashion, and sex.

She was the ultimate flapper: beautiful, smart, sexy, and didn't seem to give a damn what people thought of her.

And most of the time when was: NOW

In 1925 Brooks had a three week love affair with the most famous man in America, Charlie Chaplin. On one of those weekends the couple and another couple checked into a ritzy hotel and were not seen again for three days. Brooks related later that in that hotel none of the foursome had many clothes on in those three days.

Brooks' most famous lines was: "I like to drink and f*ck."

It was the 1920s, with it's beautiful women and America's appetite for everything flapper that set the silver screen ablaze for adoring fans.

America's beautiful flapper with her modern fashions, bobbed hair, and "devil may care" attitude was the "bee's knees" as popular flapper slang would put it.

Hollywood, in those early years and as it remains today, was the land of dreams.

But you couldn't get in if you didn't fit the mold. Fashion and movies only seem to fit the youthful and slender. Hollywood’s starlets had to remain youthful and thin, and staying young forever is a game of replacement.

Flapper culture helped shape the mould of what the "ideal" woman should look like--for better or worse.