The motor cars whiz by as you walk down 142nd street and the sound of your girl's Cuban heels slaps off the buildings and hangs in the air.

Murmured voices trickle out of the alleys and through the distance you can hear it. The smell of cigarette smoke grows heavy and as you approach the doors swing open wide.

You climb the stairs. . . and all hell breaks loose: Bodies fly around the huge dance floor as Duke Ellington leads the band to "Black Beauty" 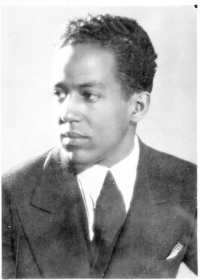 The sweet smell of liquor, cigarettes, perfume, and sweat tells you this is going to be a great night! Everyone is having a great time and so are you!

This is the Cotton Club

Jazz: A Tale of Freedom?

If the Roaring Twenties in America is a story of individuals, freedom, fashion, and music, the peak is Harlem Renaissance Music.

The Harlem Renaissance isn't a simple story to be told, you must experience it--the best way is by understanding the music. Harlem is a story of two cities divided by jazz, race, and class.

"Jazz is a good barometer of freedom. In its beginnings, the United States spawned certain ideals of freedom and independence through which,eventually, jazz was evolved, and the music is so free that many people say it is the only unhampered, unhindered expression of complete freedom yet produced in this country."

While the Harlem Renaissance will always be known for the blossoming of literary and visual arts from the early 1920s until the mid-1930s, the literature and art doesn't reflect the entire story.

Thanks in large part to the Great Migration, Harlem became a Mecca for African American poets, novelists, artists, musicians, and business people.

By 1925, 70% of Harlem was black owned and businesses flourished. The huge influx of new citizens into Harlem created crowded streets and rents that were often twice as much as white owned sections of New York City.

"Jazz to me is one of the inherent expressions of Negro life in America; the eternal tom-tom beating in the Negro soul--the tom-tom of revolt against weariness in a white world, a world of subway trains, and work, work, work; the tom-tom of joy and laughter, and pain swallowed in a smile."

Often there were two families living under one roof; sometimes lodgers switched single beds, one working the day shift and the other the night shift just to make rent.

Harlem was bustling with new people!

Many of these people were scholastically uneducated and illiterate, but enjoying music doesn't take an education that's why Jazz is the people's music.

With astronomical rent prices, renters had to come up with creative solutions to pay their landlords every month.

With Jazz's popularity and the large number of talented musicians, rent parties were frequent.

A family would hire a jazz musician and admission for all comers would be charged at the door or by "passing the hat" around.

The walls would bulge with the number of people and the volume of Jazz being played.

Cutting contests were held as one pianist would battle another to find out who was better, this type of contest has merged into the freestyle rap battle.

The Harlem Renaissance of the 1920s, jazz set the table for much of the musical experimentation that would come in the later decades.

Harlem Renaissance of the 1920s: Speakeasies

America was dry, or at least that was the rumor.

But that didn't slow down America's liquor consumption, the gangsters and bootleggers made sure of that.

The owner of the Cotton Club, Owen (Owney) Madden was a very feared and powerful gangster and bootlegger.

The Cotton Club catered to an all white audience.

For good reason, much has been made of the social ramifications of black entertainers catering to a white audience. This separation of the races points out many of the deeper social aspects of American culture, and is the foreshadowing of many more years of racial inequality in the decades to come.

Throughout Harlem there were many famous speakeasies that housed jazz, famous musicians, and celebrities during the 1920s.

Billie Holiday was famous for playing at Pod's and Jerry's Log Cabin, or Louis Armstrong playing at The Savoy Ballroom with it's huge dance floor and famous "Cat's Corner" where all the best dancers shook their thang.