"Sheik or sheba?" 1920s slang is one of the most colorful aspects of the Jazz Age.

"Why should life be work, when we all can borrow. Let's think only of today, and not worry about tomorrow." --Zelda Fitzgerald 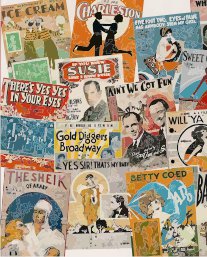 Much more about 1920s pop culture

America's vocabulary expanded with the times. Many new words and figures of speech popped up around new technology like automobiles; fashion; fads; and new people like flappers, bootleggers, and gangsters.

Here's a glossary of 1920s slang. This is not everything, if you'd like to add a word please do so at the bottom of this page.