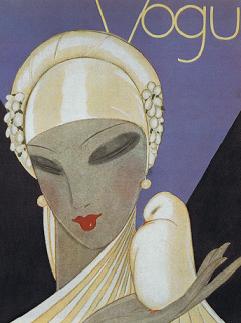 Modern fashion design was born one cool afternoon on a sun-dappled beach in Deauville, a small fishing hamlet in the west of France. . .

At ten in the morning, feeling chilly, a young woman slipped lazily into a man's sweater and tied the waist with a handkerchief. . .

As the young lady walked past the small shops that lined the narrow street leading to the beach of this quaint village in the Normandy region of France, several fellow vacationers stopped her and offered to buy "the dress" off her back -- and the Chanel frock was born.

It's said Chanel sold ten of these "dresses" by days end. . .

The house of Chanel offered new fashion to a world clamoring to reinvent itself. No longer were the stodgy old fashions of the economic elite practical or useful to a gender desiring to participate in the "modern world".

La Garconne - The Marriage of Fashion and Design

Her influence was profound in the world of designer clothes. Chanel's style also melded perfectly with the pervasive thinking of the 1920's. . .

Women wanted their independence and Chanel was the distinctive independent woman.

To women in the 1920's, independence it seems, meant looking "more like men". The fashion-forward young women of the era:

"Without breasts, without hips, without 'underwear,' who smoke, work, argue, and fight exactly like boys and who. . . with their heads swimming under several cocktails, seek out savory and acrobatic pleasures on the plush seats of 5 horsepower Citroëns - these aren't young girls."

Influenced by the "real" world, the world of fashion reflected the social undercurrent of the 1920s.

Your independence is reflected in the clothes you wear, thus your personal style defines who you are within society.

In the 1920s this independent fashion was reflected in what the French called "La Garconne" - while English speaking countries called this new look "Flapper" style. Marked by its shorter hem, narrow silhouette and "dropped" waistline, the flapper fashion demonstrated the bleed over of men's fashions into women's styles.

"Fashion does not exist until it goes into the streets."

The world of high fashion design is in a quandary. . . How do you keep the coffers full while keeping designer fashions in the hands only of the social and economic elite.

To maximize revenue, at some point large quantities of product must be headed out the door.

With the advances of fashion design and production techniques a type of revolution occurred in the world of 1920's haute couture - democracy.

The simplicity of women's fashions lent itself to reproduction at the hands of anyone with a needle and thread and an eye for forward thinking fashion design.

After all, up until the turn of the century women had made their own clothes. Now, with the women's magazines and catalogues, style was made available for all woman.

The unique, cutting-edge styles that graced the pages of Vogue in March were available for mass consumption by Montgomery Ward or Sears, Roebuck in August.

With this saturation of fashion throughout the Western world, its no wonder since the 1920's that fashion design has taken on such an influential role in society.