In 1920 Flappers Took Over the World

In 1920 flappers and flapper fashion was very new.

The '20s were an exciting and scary time to be young. Starting in about 1918, when F. Scott Fitzgerald met Zelda Sayre, flapper fashions, style and attitude was making its presence known to the world.

Flapper-dom was not simply fashion movement.

It was a essential shift in female action and perception of women in society. These were the "new women" of a new age. In 1920 flappers and non-flappers received the vote.

The passage of the 19th amendment was not only symbolic for female rights, it also marked a major shift in American society's perception of women. Women were asserting themselves, though there was still major work to be done to attain "equal" rights.

Not only did it bring women the right to vote it also rang in the prohibition which made alcohol and alcohol consumption in America illegal.

Suzette Dewey: Daughter of the Assistant Secretary of the U.S. Treasury

Even with the passage of the prohibition, the 20's are know as the "Roaring Twenties" this is not because people actually took prohibition seriously. 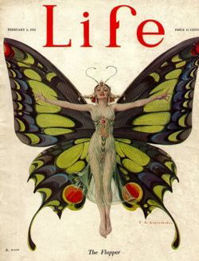 The sale of cigarettes doubled in the 1920s because women wanted to do what their male counterparts were doing.

These activities, as you might suspect, were frowned upon by the staunch older generation. It's important to note how people thought in those days.

In 1920 flappers were thought of as girls who wanted to be boys. The new fashions of visionary fashion designers like Coco Chanel and Paul Poiret gave women a new flexibility in their wardrobe.

There was a sexual revolution happening right before everyone's eyes. Cars were the ultimate symbol of individuality and freedom, and they made for safe "necking" stations for young people who could not go "back to your place."

The Writer and The Flapper: The Perfect 20's Couple

F. Scott Fitzgerald played a huge part in the rise and definition of flapper fashion and culture. Fitzgerald was hailed as the flapper "king".

He and his wife Zelda were considered the perfect "flapper couple".

Fitzgerald published several short stories in the late teens and early twenties that greatly influenced the impressionable young soon-to-be flapper girls. Short stories like "This Side of Paradise", "Bernice Bobs Her Hair" and others were wildly popular in the early twenties.

"The Beautiful and The Damned"

Scribner Publishing house compiled and sold his short stories in a collection called "Flappers and Philosophers" in the fall of 1920.

The first year of the decade turned out to be a seminal year in the development of Scott's career and a watershed moment for the flapper movement.

With a readership of nearly 3 million, the Saturday Evening Post was huge in middle-class America, and Scott's stories of youthful freedom and vitality had a profound influence on the hopes and dreams of young girls in middle-America.

The Flapper Lifestyle of The Jazz Age

Life imitates art and Scott and Zelda lived the ultimate flapper lifestyle: they dressed, drank, drove, had sex, and smoked with a recklessness and disdain for tomorrow.

They both lived fast and loose and ultimately they ended up dying early deaths because of their carefree ways. It's unclear whether Fitzgerald created the flapper or the flapper creating Fitzgerald.

Scott was the right person in the right place at the right time. His success is much like that of Coco Chanel. They were two individuals capable of capturing the essence of the youthful 1920 flappers movement.